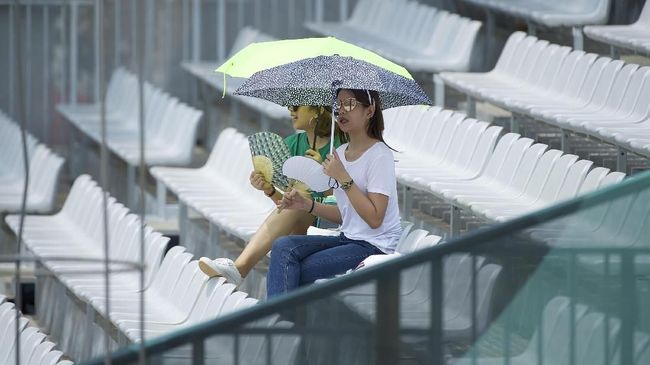 A number of regions in Indonesia are covered with warm weather which has been pretty extreme the last few days. A number of phenomenal facts meteorology these are revealed, from causes to heat records.

The phenomenon of hot temperatures in a number of regions has been felt by a number of cities, especially in the southern part of Indonesia, since the first day of Idul Fitri 1443 Hijriah. The Meteorology, Climatology and Geophysics Agency (BMKG) said the phenomenon usually makes residents feel hot.

The temperature figure is known to have exceeded the normal maximum limit. In Jakarta, the temperature had touched 36 degrees Celsius. At the same time, a heat wave hit several countries, such as India and Pakistan.

To dig deeper into this temperature phenomenon while answering questions from locals, the expert revealed a number of heat-related facts.

He said that generally during the transition period or the transition to the dry season, weather conditions, especially in the morning, were dominated by sunny weather and very low cloud levels.

This causes fairly hot and scorching temperatures during the day, with the potential for rain accompanied by lightning or lightning.

The head of the BMKG Public Meteorology Center, Fahry Rajab, said the temperature was still normal this time around, usually around 33-36 degrees Celsius.

“But why is it so hot? There is another influence, namely the humidity of the air. Because Indonesia is tropical, the humidity is high. humidity makes it warm because there is more evaporation from the body,” Fahry explained.

Miming added that the weather, particularly in the morning, was dominated by sunny conditions and very low cloud levels. This can trigger quite hot and scorching temperatures during the day.

“This can happen due to the lack of cloud cover in the Jabodetabek area in the morning, so there is maximum solar radiation heating up the surface. Then in the afternoon and evening, clouds usually form and rain may occur,” he explained.

4. Influencing the position of the sun

Miming explained that the apparent position of the sun is in the direction of the region north of the equator, aka the equator, or precisely at 14 degrees latitude and is still moving north until June 2022.

The apparent movement of the sun itself is the appearance of the center of the solar system which seems to move from east to west (pseudo daily movement, effect of the rotation of the earth) or south to north (pseudo annual movement, effect of earth revolution).

The peak of the dry season in Indonesia itself usually occurs in June 2022.

Fahry Rajab explained that the hot temperature in Jabodetabek was not the highest. The record temperature ever recorded in Indonesia is 40 degrees Celsius at Larantuka, East Flores, NTT, 2012.

Meteorological Assistant Guswanto said heat waves generally occur in mid-to-high latitudes, such as Europe and America, which are triggered by mid-latitude atmospheric dynamics.