Toyo Haryono The Forgotten Hero of the 1991 SEA Games 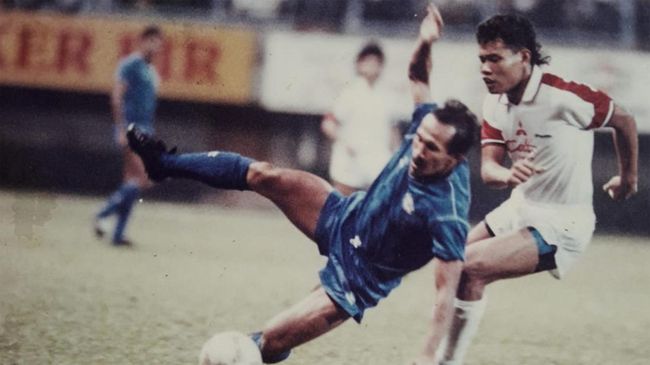 I Toyo Haryono, former Indonesian footballer of the 80s-90s. Champion 1991 Sea Games was the best moment of my career with Garuda.

To be selected as a player for the Indonesian national team is the dream of all footballers, myself included. But it takes sacrifice and a long struggle to get there.

At first I was just a kid who liked to play football after school. I never dreamed of becoming an Indonesian national team player.

My dream exploded because I was amazed that my brother got into PSMS Junior. Still a teenager but can fly out of town in a neat team jacket.

“It’s really cool to be a footballer. You can fly anywhere on a plane and wear a team uniform jacket,” I thought to myself.

Turns out my prayer was answered. When I was 12 years old, I was chosen to represent the Deli Serdang team to participate in the All Indonesia Student Sports Week (POPSI). My talent seems to be watched by coaches or Sumatra football legends when I play in the league in Medan.

From there, he was selected to enter the Medan Education and Training Center. Proud don’t play. I became more determined to choose football as a way of life when I was chosen from education and training all over Indonesia and also joined Ragunan SKO until high school there.

I learned many lessons and experiences while being forged in Ragunan. In addition to the scheduled training, we had the opportunity to go abroad to represent Indonesia at the inter-student championships. From Malaysia, Singapore, China, South Korea, also India.

In 1985, I was also one of the Ragunan students who went to Germany. One could say that it is the precursor of the Baretti or Primavera project.

The difference is that we have been training at a junior Bundesliga club like Hamburg, Stuttgart and Bayern Munich for almost eight months.

In 1988 I was also included in the list of players who attended a training camp in Germany, coinciding with the European Cup.

You could say that the students of Ragunan, myself included, have been observed by the Galatama clubs. At that time, we were considered worthy of inclusion on professional teams because our posture and quality were on par with professional players.

The training program in Ragunan is indeed very tiring as we are used to regular physical and technical training programs. When kids my age can play anywhere, we are constantly trained to become future athletes.

However, my hard work paid off when I was trusted to join the Indonesian national team at the 1989 SEA Games in Kuala Lumpur, Malaysia.

I was selected at the last minute because then-senior defender Robby Darwis couldn’t be played. If I’m not mistaken, they have to face red card sanctions in previous international events.

Continue reading this article on the next page>>>