Towards a worse future 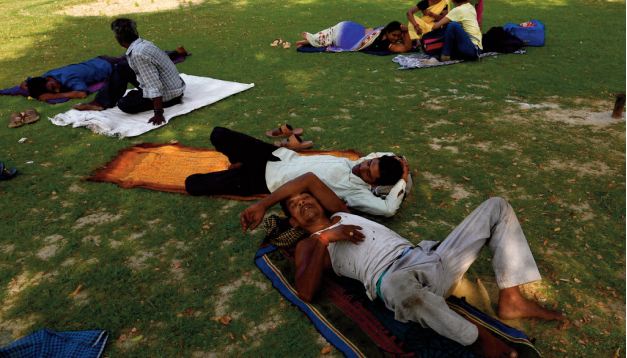 The sweltering heat that has hit India and Pakistan for two months is unprecedented, but the future looks worse, much worse, scientists warn as climate change accelerates.

More than a billion people in South Asia experience extreme temperatures in March and April, well above 40°C, even before the start of the rainy season. And it’s not over yet.

“This heat wave can kill thousands of people,” warns Robert Rohde, a scientist with the Berkeley Earth group. The number of these deaths, especially in the poor and the elderly, can only be known later.

Heatwave-related deaths in India, which was the victim of deadly heatwaves in 2015 and 2019, have risen by more than 60% since 1980, according to India’s Ministry of Earth Sciences.

And other “tiered impacts” on agriculture, water, energy supplies are already visible, World Meteorological Organization (WMO) head Petteri Taalas said this week.
Not to mention deteriorating air quality, increased risk of fire, or power outages.
For climatologists, this is far from a surprise.

“What strikes me is that most people are surprised when they have been warned for a long time that such a catastrophe is imminent,” said Camilo Mora, a researcher at the University of Hawaii.
“This region of the world, and much of the tropics, is among the most vulnerable to heat waves.”

In a landmark study published in 2017, he and his team estimated that nearly half the world’s population will be exposed to “deadly heat” at least 20 days a year by 2100, even if warming does not exceed 2°C higher than pre-industrial times, the goal of the Paris agreement.

Scientists are currently working to assess what part of the warming is responsible for the heatwave in South Asia.

“But there is no doubt that climate change is changing the rules of the game when it comes to heat waves,” one of them, Friederike Otto, of Imperial College London, told AFP.
“What we see now would be normal, even cold, in a world between +2° and +3°C”.
The planet has so far averaged around 1.1°C and if all the commitments of signatories to the Paris agreement are kept, mercury will rise by 2.8°C, according to UN climate experts (IPCC).

“Before human activity caused global warming, an Indian heat wave would occur every 50 years,” said Marian Zachariah of Imperial College London. From now on, we can expect it “once every four years”.
And according to a study published this week in the journal Science, things could get worse even faster than expected.

The team led by Vikki Thompson, from the University of Bristol, ranked the worst heatwaves since 1960, not based on maximum temperatures but on deviations from what would be expected. Surprisingly, South Asia is not at the top of the list.

“If you look at deviations from the local normal, the heat waves in India and Pakistan so far have not been that extreme,” explained Vikki Thompson and colleague Alan Thomas Kennedy-Asser.

According to their calculations, it was Southeast Asia in 1998 that won the award. With a deviation from normal by the same magnitude, India would reach more than 50 °C instead of 40 °C, notes Vikki Thompson.
“Statistically, it’s likely a record heatwave will hit India at some point.”

Extreme heat is even more dangerous when combined with humidity, a phenomenon as measured by a “wet bulb” or TW which takes into account the body’s ability to lower its temperature through sweating.

Knowing that the body cannot lose heat if the outside temperature TW exceeds its own temperature, a healthy young human in the shade and with plenty of water cannot survive more than six hours at 35 degrees TW.

During the 2015 heatwave that killed more than 4,000 people in India and Pakistan, the “wet thermometer” hit 30 degrees TW.

Worse this year, with a peak of 32.2 degrees TW last week in Nagpur, central India, according to Thibault Laconde, boss of a start-up specializing in adaptation to global warming.