Toulouse: The painting “Picasso India” up for auction at Primardeco 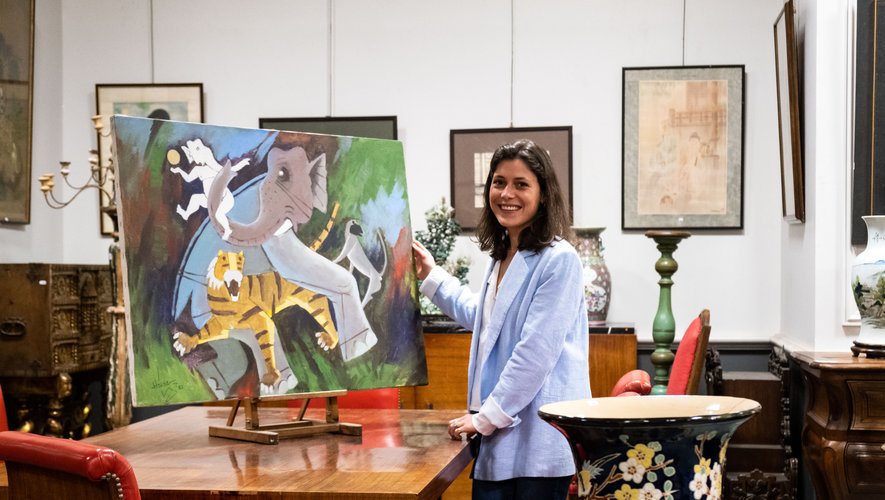 the important one
This Thursday, the Hôtel des Ventes Primardeco (Ivoire Toulouse) is auctioning off a painting by Indian artist Husain. A painting with an unusual history.

Jérôme de Colonges admits: “this is the first time in my long career as an auctioneer that I am auctioning an Indian painting”. And not just any. A painting by contemporary painter Maqbool Fida Husain, famous in his country, is exhibited around the world and is called “The Picasso of India”. An artist who died in 2014, through various modes of expression including figurative. “His paintings often tell of Indian mythology, confirms Jérôme de Colonges. This Thursday’s auctioned painting, Allegorical Representations of India’s Bestiary, painted in 1982, details the story of India’s three sacred animals associated with gods and goddesses, elephants (Ganash), tigers (Durga) and monkeys (Hanuman). Myth and character mixed in this artist’s grand fantasy.”
An artist touching everything, he also went through poster art in 1935 with a production for Bollywood. He is also a talented director, being awarded in 1967 with the Golden Bear at the Berlin Film Festival. And a brave artist, representing in 1970, an Indian god, naked. Which would cause a huge scandal in this country and put his life in danger. Threatened with death by Indian fundamentalists, he was forced into exile in 2006 between Dubai and London.

“I will write this unusual story in my memoirs”

Despite the scarcity of sales, the story of this canvas is surprising: “I found this painting during an inventory of a house on the Côte Pavée, continues Jérôme de Colonges. Obviously, the question immediately arises: how did this canvas arrive in Toulouse? “.
The owner then detailed to the auctioneer the unusual journey of this painting. “In his youth, he followed his parents to New York. One evening, they welcome into their home a young Indian artist who is passing through New York for an exhibition about Mother Teresa, met on a visit to the poorest. This artist is Fida Husein, who started painting. To thank them for their welcome, the young artist would give this painting to the young woman’s parents, belittling its value.” The canvas then traveled extensively with its owner, before coming to this Toulouse apartment. It is estimated that between €40,000 and €50,000, according to Jérôme de Colonges, this painting could be much more. “A story to write in my memoirs as an auctioneer”.

This Thursday at 2pm, at Primardeco, 14 rue du Rempart Saint-Etienne in Toulouse.