Vinoteca, literally means a wine collection. Although in Spain, an exclusive wine bar is also called Vinoteca. Having sommelier Cecila Oldne at the helm of the vino collection, Rajeev Samant of Sula, decided to open a wine bar, for which he was looking for the perfect chef to design the menu. When he met Silvia Grimaldo of Ibiza, he was originally thinking about serving sushi but the chef convinced him to go for a Spanish authentic tapas bar.That is what makes Vinoteca the perfect place to lounge on a Sunday afternoon — their great (and might one add highly affordable) collection of Indian and international wines, and the beautifully designed menu, put together carefully with traditional snacks from the Latin countries from both Europe and America. The decor while being slightly cliched “wine bar” comes with the Spanish tapas bar chalkboards with specials thrown all over the place. But the music most definitely works for the mood. 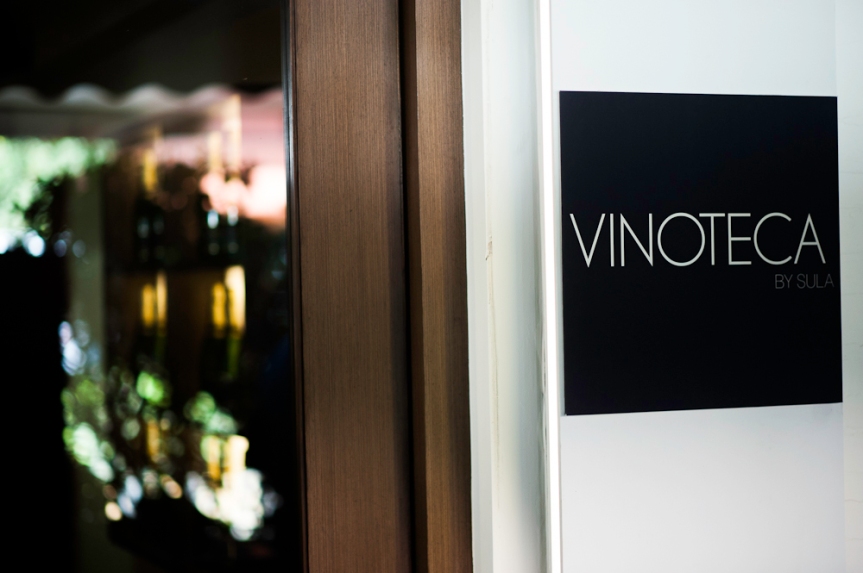 “All the tapas places serve very fancy tapas. I didn’t want to do that because I don’t like it. Spanish tapas, to be enjoyed with wine should be light, and basic. I wanted to recreate the traditional tapas bar menu that I have grown up eating,” says Silvia, who comes from a family that makes their own wine. And we must say that Silvia’s menu manages to blow your mind right from the first course. A Sula Brut with a Cheese tabla, which featured Manchego from La Mancha, the smoky Idiazabal with Kalamata olives and dill hummus. “I don’t know why Indians ask for crackers with their tabla.”

And then we had something that we will recommend you to go all the way to Vinoteca to just try — their Ceviche. A cold food, raw chopped kingfish in marinate made of sweet lime, lemon, orange, french mustard, coriander and green chillies — Peruvian tapas that evolved after the second world war when a large Japanese community had settled in Peru. Along with which, the main course had Beef Tagliata — a light beef tapas with parmesan, porcini mushrooms — the best thing to have with a Sula Dindori Shiraz. Vegetarians should not forget to try their Melanzana a la Parrzegiana, which by the looks of it might remind you of creme brulee but it blows your mind with the fresh mozarella and brinjals like you’ve never even fantasized about brinjals. And finally Berenja Rellena – halved brinjals, topped and cooked with minced lamb. Each dish had its own distinct flavour, simple yet tantalizing. Dessert lovers have nothing to worry about. Vinoteca with Amore gelato have developed a Shiraz and a Zinfandel gelato, both of which are the most refreshing flavours in cold desserts that you will see.

Overall, Vinoteca gets a two thumbs up. Get yourself down to Worli and park yourself there till your head is swirling between a wine buzz and a food coma.

1. Brut with the Cheese tabla
The stronger the cheese is that is served on the tabla, the better it pairs with the refreshing and a little bubbly Brut.
2. Sauvignon with Almejas Marinera
Sauvignon is the driest of the wines, pairs well with seafood in tomato sauce, the onion and garlic in the Marinera sauce.
3. Rasa Shiraz with Entrecot a la Pimienta
Rasa Shiraz is a red wine that works perfectly with the pepper in the white sauce of the Entrecot
4. Solar de Estraunza with Jamon patanegra de guijuelo
Nothing goes as well with rich Spanish food as does a rich Spanish wine
5. Piper-Heidsieck Cuvee Brut NV with Tuna Tartare
This Piper is an amazing dry wine with refreshing bubbles. It pairs brilliantly with the raw tuna.