Now that the New year festivities have slightly mellowed down, I cant think of a better way to start the year of hectic work and even more social events than a Spa visit. So that is what I did to start 2014 with my visit to Ishana Nature Spa. Ishana Nature Spa offers a cocoon of luxurious comfort and enriches your experience further with a range of traditional therapies. Based upon centuries-old Ayurvedic tenets and enriched with an exclusive range of natural ingredients, the therapies at Ishana aim to support balance and enhance bliss in your life.

From the moment you enter the Ishana Nature Spa, everything you feel and touch is pure and gentle – every extravagance stimulates a feeling of well being as you surrender yourself to the very caring and experienced hands of the expertly trained therapists. The city spa, located at MGF Mall, Saket is a spa lifestyle brand that brings Asian heritage to the spa scenario in Delhi and the Ishana Nature Spa therapies are designed to provide maximum benefits to the discerning guest. If you remember few months ago I had visited the Ishana Experience centre at IGI airport, which was more about the experience than the actual spa treatment but was a great experience, so my level of expectation had been set quite high when visiting the Nature Spa at Saket. I certainly wasn’t disappointed. The first thing you notice during the treatment is the heated bed, which makes it extremely comfortable to have a treatment during the winters. The second is the absolute expertise of the therapist as she slowly massages the knots out of your muscles. I always find it strange when a busy mall has such serene places, they are relaxing and definitely worth a visit. Of course here too is a gift shop where you can buy products completely Indian and organic in nature. Though I suggest you do it prior to the massage, as post massage you want nothing but a cup of chai as you cuddle in bed with a novel.

The latest entrant in the restaurant scene is Cafe Ludus at MGF Metropolitan mall, Saket. Ludus literally means school and that is the ambience they have treid to create as I learnt from one of the five owners, Gaurav Gupta. The areas in the cafe’ have been divided into various aspects of school like the laboratory, a Library, a cafeteria and amphitheatre and just as names suggest the areas depict exactly that, for instance-the library is named such cause it has been designed with books and board games stacked on the wall, so one can come in and read if tired of shopping in the mall or even play board games with friends. The amphitheatre is where they plan to hold various events like sundowners, body painting and more such. The laboratory will be the bar, but they are very clear the emphasis is not the drinks, they don’t want it to turn into another lounge or bar but be a cafe with emphasis on food and even catching up with friends. Hence the emphasis on the board games and the interactive events. 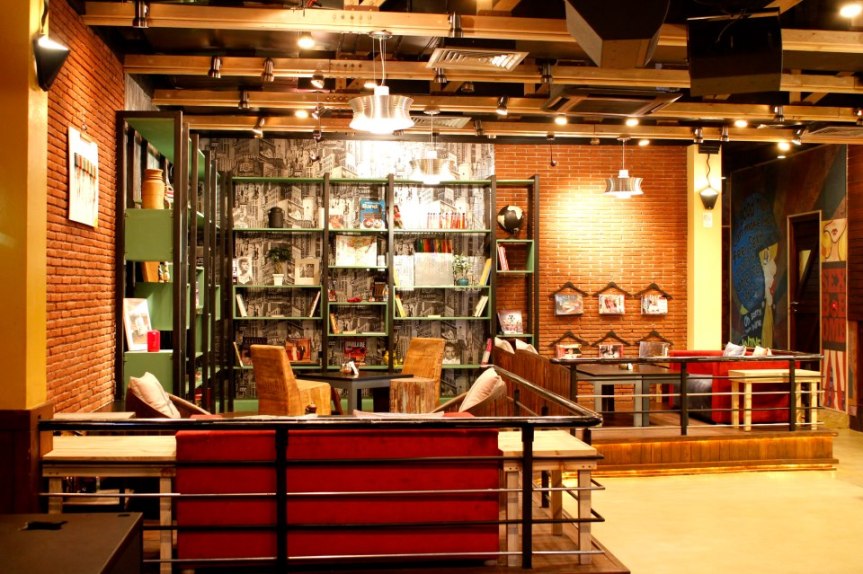 In terms of interiors again they have kept in quite sync with the school theme and mostly it is minimal wood and steel with some areas of exposed brick. The rest of the spaces like the restrooms have graffiti and other graphic designs on the walls. The furniture is mostly wooden benches and chairs with table tops having blackboards with scribbled menus. Its only the outdoors which breaks the school cafe scheme and seems a bit of a lounge with stone benches and cabana’s with wicker furniture and white sheer curtains, which is a slight disappointment from the rest of the decor. But here too they have tried to incorporate the theme with alphabet cushions and some mismatched furniture. 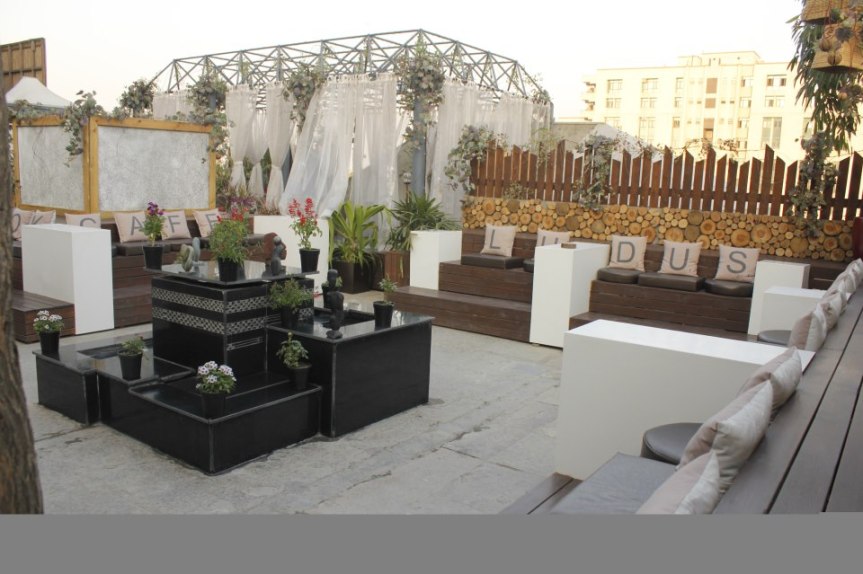 In terms of food, Café Ludus has flavors from around the world and a vast variety. Starting with breakfast, where you can select from pancakes to eggs. During the rest of the day you have a handpicked selection of soups, salads, mains, house burgers, deserts and shakes. All prepared with finesse and served with an exquisite Sauce. They have over 70 different sauces to go with the various meals and they are out of the world. In terms of dishes, we tried a whole bunch of them and were super impresses. We started with the Jalapeno croquettes followed by Drunk sole; which is beer battered fish served with Tartar sauce and Chicken Souvlaki which is grilled chicken served with Turkish aioli dip as bar snacks along with our mocktails (that time they had not got their liquor license). They are obviously very influenced by Greek mythology, as most of the names on the menu have Greek reference, and as tempting as Poseidon Panini and Maximum Tenderloin burger looked we decided to skip them so we could have a greater variety from the menu. This included the Chicken Roulade which was Spinach stuffed chicken served with wasabi mashed and sitaki mushroom juice, fish especially Basa has become a favourite of mine so Cambodian Basa which was grilled to perfection was also on the list. Finally we decided to get a Marco Polo pizza just so we could try it out, again it was delicious. But as much as I loved the food and over all concept, the desserts were a disappointment, but the owners and chef assured me they are working on it so will be amazing by the time I visit next. I sincerely hope that has happened as I am looking to go there this week! You should do the same.

Method
1 “Heat butter and oil in a sauce pan on slow flame and add flour. Make roux out of the mixture. After making the roux add milk , cheese and make a dough.”
2 After making the mixture add salt to taste. Add chopped jalapenos.
3 “Make a batter of flour,water,salt and pepper.”
4 Heat oil in a pan for deep frying.
5 “Make round balls of mixture and dip in batter. After dipping, coat with panko crumbs.”
6 Deep fry in the oil.
7 Serve hot with cocktail dip. 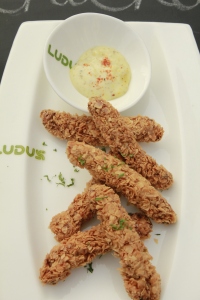 Method
1 Slice Sole into fine finger sized slices
2 “Prepare a batter by carefully making a thick batter of the flour,egg,paprika powder,salt,lemon juice,beer ”
3 Marinate the fish in the batter for about two hours
4 Thereafter coat the battered fish with bread crumb and sago crumb
5 Deep fry till deliciously golden brown
6 Serve with slices of lemon and tartar sauce/dijon mustard

Love needs no age no boundaries it just is!! Thank you guys and thank the universe #blessed