So as everyone must have by now seen and formed their own personal opinion, unless ofcourse you are living under a pile of rocks with no internet, TV or print media to aid you; Brad Pitt is the new face of the Chanel. The ad shows clips of an array of women going through various activities and dressed such, from casual weekends to office to glamour and Brad Pitt standing against a grey backdrop saying a few lines looking doe-eyed and fake in my opinion.

Well I don’t know about you but the ad did not really work for me, firstly because for the longest time when I heard about it I thought Chanel has gone Homme even until the first clip where its only Brad Pitt. After I put both clips together I figured it’s still femme but somehow minus the allure and exclusivity of Chanel. I mean with the earlier ads the women were fabulous like Marilyn Monroe, Nicole Kidman, Audrey Tatou, Catherine Deneuve, you wanted to taste their scent. Now it seems just random and Brad Pitt really doesn’t help. As for Mr.Pitt First Chanel now Luxury furniture, he is definitely keeping himself occupied in other avenues. Pitt, collaborated on the collection with U.S. furniture designer Frank Pollaro. Pitt has previously worked with well-known architects for his Make It Right foundation to create affordable quality housing for the victims of Hurricane Katrina in New Orleans. He also designed a diamond ring for his partner, Angelina Jolie, when the couple got engaged earlier this year. From the couple of pieces featured in Architectural Digest I can say I am half impressed,as in a few pieces I loved and few I loathed. His inspiration comes from Scottish architect Charles Rennie Mackintosh’s Glasgow Rose,he designed his collection with the fluidity of a single line, be it geometric or circular.I cannot wait for the official Pitt Pollaro site will launch on November 11th at: http://www.pitt-pollaro.com/ 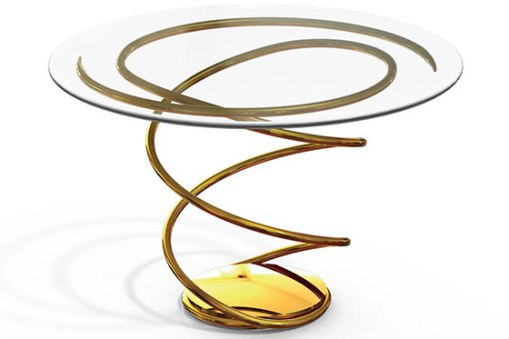 You guys have a look as well and let me know what you think. Works for you or not?
P.S- Join me on www.facebook.com/stylecity.in and follow on @AparnaStylecity, to get more snippets as I speak of various things.