Australia is on everyone’s lips, literally. Australia is affecting our culinary experience, be it thanks to Masterchef Australia the most watched food show in the world or the fact that a lot of chefs at restaurants and hotels around the world, especially in India originate from Australia. So even though Australia is multi-cultural and you cannot trace something which can be called Australian cuisine, it has added a lot to world cuisine, making it the new and upcoming destination for food lovers. Like London, Australia too is setting trends in what we eat and how we eat it. This August, Shangri-La’s – Eros Hotel, New Delhi, brings you the best in food and culture from Australia, as Chef Matthew McCool, chef de cuisine at the iconic “Altitude”-Restaurant at Shangri-La Hotel, Sydney comes to Delhi. The weeklong Australian food festival opens in the last week of August 2013 and will run across two outlets – Café Uno and 19 Oriental Avenue – between 24 and 31 August 2013 under the expert guidance of Executive Chef Darren Conole. 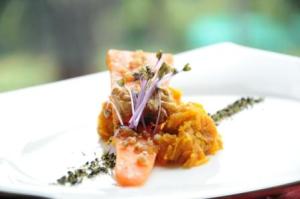 The food festival started with a wine dinner on 24 August 2013, showcasing the best of wine and food from Australia. Patrons savoured delicacies such as Tasmanian Salmon, Quail, and Riverina Lamb Loin amongst an array of other plated delights paired with fine Australian Wolf Blass wines such as Eagle hawk Cabernet Sauvignon, Eagle hawk Chardonnay, Merlot as well as Rothbury Estate Sauvignon Blanc. Café Uno will feature an extensive and sumptuous Australian buffet for dinner using the fresh and organically grown gourmet produce, meat, cheese, seafood, seasonal fruit and root vegetables for which the region and its food is renowned worldwide. The festival will feature the flavours of Australian food for lunch and dinner at 19 Oriental Avenue until 31 August 2013 and will excite and enliven your palate. Come and celebrate Australian Culinary delights this August at Shangri-La’s – Eros Hotel, New Delhi.
Café Uno – (91 11) 4119 1010
19 Oriental Avenue – (91 11) 4119 1040