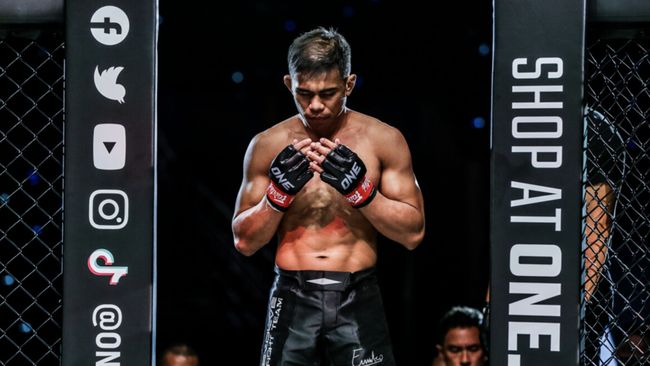 Indonesian fighter, Eko Roni Saputra is looking forward to ONE 161: Moraes vs. Johnson II August 26. He himself held out hope of being able to fight in a primetime event in the United States and streamed via Amazon Prime Video.

In the showpiece event, ONE 161 will see a clash between ONE Flyweight World Champion Adriano Moraes (19-3-0) against Demetrious Johnson (30-4-1), one of the greatest artists in mixed martial arts (MMA) of all time. . In April 2021, Moraes shocked the world after becoming the first person to win via TKO against DJ, the American athlete’s nickname.

“I hope there will be a call for me to play. Personally, I want to be known to more people. In fact, ONE Championship is already world famous, but if it could be broadcast in prime time Americans would be even better,” Eko Roni said in his statement, Friday (6/10).

Eko Roni himself gave his take on the Moraes vs. DJ Volume II fight. According to him, DJ will be more alert depending on the first fight.

“DJ will definitely be more alert because yesterday he looked like he missed a knee attack. My prediction is 50:50. In the first game, that can’t be judged because the fight didn’t last long. So the strategy for the game has not been seen,” the Samarinda, East Kalimantan-born man, 31, said last year.

FYI, Moraes fought DJ in the first fight titled ONE on TNT I, a sharp knee attack from Moraes in the second round knocked DJ down. Quickly, the referee stopped the fight and Moraes was declared the winner.

At ONE X in March of this year, Moraes was able to defend his title again after defeating Yuya Wakamatsu. Meanwhile, at the same event, DJ defeated Rodtang Jitmuangnon in a hybrid MMA and Muay Thai match.

Their meeting has become hot news for martial arts enthusiasts in the land of Uncle Sam in particular. After all, DJ is a dominant MMA athlete who has been a 12-time world champion.

With this capital, it is certain that the upcoming game will attract worldwide attention. Additionally, Amazon Prime Video has nearly 200 million subscribers worldwide and in nearly every home in the United States.

Other than the final match, there has been no confirmation of another match that will honor ONE 161. However, if you participate, this event may be an opportunity for Eko Roni to show off his skills.

“This event is very good. If possible, every game of ONE will be shown in prime time in America. It’s time for ONE to come out there. In fact, ONE has more global athletes from all over the world, not only from Brazil or America,” he said.

Eko Roni himself competes in the flyweight division – the same class as Moraes and DJ. Currently, he is aiming for a breakthrough in the top five.

In his last match, Eko Roni showed convincing defeating Chan Rothana in the first round with a rear naked choke. It also extends his winning streak to six in a row.

“People can see for themselves what competing in the flyweight class is like, and I’m interested to see how it develops. I also want to meet one of the best athletes, and one day I will meet him. It’s just a matter of time,” said Eko Roni.

Currently, there is no timeline for when Eko Roni will fight again. However, Gurdarshan Mangat’s name became one of his targets. The Canadian-Indian man is coming off Thailand’s Yodkaikaew Fairtex at ONE 158.

Moreover, Mangat is eyeing a top five position as well, and that could be a reason for the two to meet in the circle.

“If possible, meet me first with him. Both ask for the top 5, right? When you talk about it, everyone wants to get into the top five, so they have a name and allow the people to see and be taken into account,” he said. said.

“People may not see it now, and that’s always normal. Who the opponent is, I have to be ready, because in the future the opponent will be even better,” concluded Eko Roni.