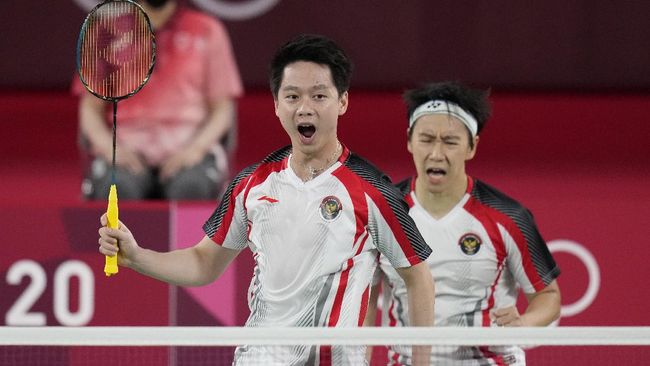 Kevin/Marcus won two matches by directly beating Rankireddy/Shetty through two 31 minute matches with the final score 21-13 and 21-12 at Mushashino Forest Sport Plaza. The result also saw them both qualify for the men’s doubles quarter-finals at the Tokyo Olympics.

This victory was the ninth for Kevin / Marcus against Rankireddy / Shetty. One of the highlights of the match was Shetty’s attempt to break Kevin/Marcus’ concentration with a serve that was jolted and delayed for some time.

However, these efforts did not pay off as Kevin/Marcus were able to stay focused and finish the Rankireddy/Shetty resistance.

“Our meeting record is indeed much higher, but it has no effect on the pitch. If it’s on the pitch, it’s 0-0 again. In today’s match, they have played more strategy than previous encounters. Shetty’s serve was pretty boring because it took so long and it keeps spinning over and over, but again, we’re ready,” Kevin said from the official statement from PBSI.

Marcus himself was happy as he and Kevin managed to perform at the best level since the start of the game.

“Today we played from the start because we didn’t want to lose our focus. They are good players, their attacks are also good,” Marcus said.

Ahead of the Tokyo Olympics quarter-finals, Kevin/Marcus will first face Taiwanese representatives Lee Yan/Wang Chi-Lin in the final game of the Group A stage on Tuesday (7/27). The second game will start at 12:00 p.m. local time or 10:00 a.m. WIB.

The two agreed to focus on the last game of the group before focusing on their next opponent in the quarter-finals.

“We want to focus on tomorrow’s game first. Just one at a time, there’s a long and long way to go,” Kevin said.

“We want to win gold, but the game is still a long way off. We don’t want to put more pressure on ourselves. We just want to enjoy every game step by step,” Marcus said.