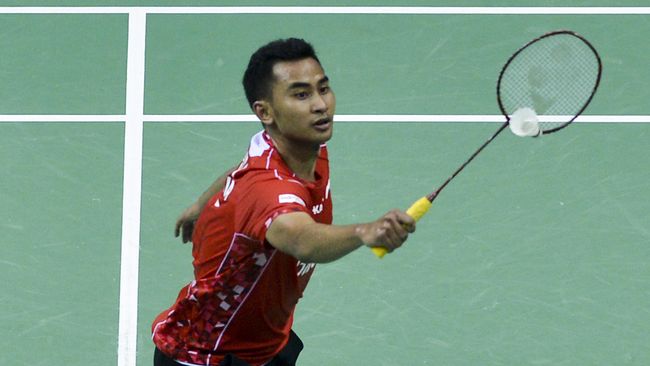 The Tommy vs Tze Yong duel was fierce. Tommy and Tze Yong looked like they didn’t want to start late. The two try to put difficult balls in each other. After a 3-3 score, Tommy was able to get consecutive points and left Tze Yong.

The non-Platnas PBSI athlete then led by four points. Tommy’s skill causes Tze Yong to make mistakes. On the other hand, Tze Yong still doesn’t want to give up easily.

Tommy leads 11-8 in the first interval of play. After the break, Tze Yong tried to increase the pace of the game. This way, the 68th-ranked world resident tied the game on 12 points. Tommy had a 15-12 lead, but Tze Yong took the lead in six straight points.

Tze Yong’s scoring streak came to a halt after Tommy got a lucky ball. At 16-19, the match was stopped due to problems on the pitch.

After the match resumed, Tze Yong picked up two points which caused Tommy to lose 16-21 in the opener.

After leading 10-11 in the second interval of play, Tommy equalized on 12 points. The match was fierce in long rallies which forced both athletes to give their best.

In a situation leading 13-12, Tze Yong had time to seek treatment. After the game resumed, Tommy picked up points nonstop and won 21-14 in the second game.

In the game of determination, Tze Yong returned to his best performance. A hard duel presented itself again. Tommy’s appearance at the start of Game 3 was less consistent. The Malaysian ranked 60th in the world took advantage of Tommy’s negligence and led almost the first half of the third game.

Tommy, who was 4-11 down in the Game 3 interval, again dropped many points in the remaining games. Tommy’s steps at the 2022 Indian Open were stopped in the first round after losing 5-21 in the third game.