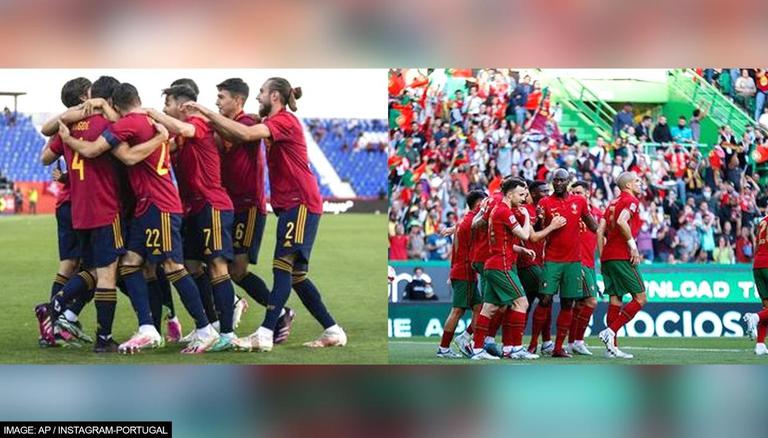 UEFA League A Nations League Group 2 is set to feature two blockbuster clashes, as Euro 2016 champions Portugal take on the Czech Republic and 2010 World Cup winners Spain, will face Switzerland in the other fixtures on Thursday night. Both matches will kick off live at 00:15 IST on June 10.

Ahead of what promises to be two thrilling games, here’s how to watch the 2022 UEFA Nations League live in India, USA and England, as well as POR vs CZR and SUI vs SPN livestream details.

How to watch UEFA Nations League 2022 matches live in India?

Fans wondering how to watch the 2022 UEFA Nations League live in India can tune in to Sony Sports Network, which holds the official broadcasting rights in the country. For Spain v Switzerland and Portugal v Czech Republic live broadcasts, fans can watch on the Sony LIV app. Meanwhile, fans can also follow updates and live scores on the official social media of the two competing teams and the competition handle.

England fans wishing to watch the 2022 UEFA Nations League match live can do so on the Premier Sports Network. Subscribers will be able to stream games through Premier Player. The match will kick off live at 19:45 BST on Thursday, June 9.

Fans in the United States who want to watch a UEFA Nations League match live can watch Fox Sports Network. As for the live broadcasts of Spain v Switzerland and Portugal v Czech Republic, fans can use the FuboTV app. Matches will kick off live at 2:45 p.m. ET and 11:45 a.m. PT on Thursday, June 9.

After two games each, Portugal are currently top of Group 2 Liga A with four points, level on points with second-placed Czech Republic but on a better goal difference. The two teams are followed by Spain in third place with two points. Meanwhile, Switzerland has not opened its account.