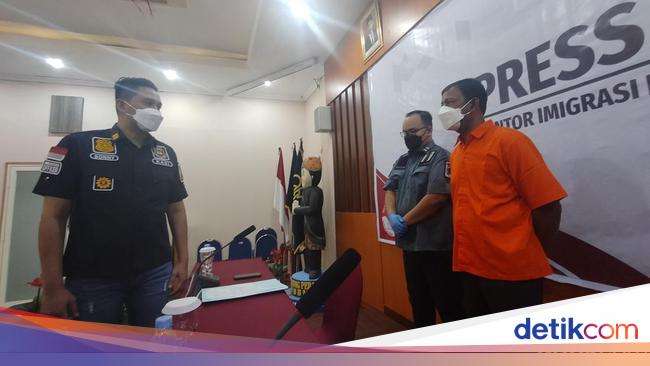 Tanjung Perak Surabaya Class 1 Immigration Office deported a foreigner from India with the initials HMNS. He was deported for violating his residence permit while in Indonesia.

Head of Technology, Information and Communication for Tanjung Perak Surabaya Immigration, Wawan Anjaryono, said HMNS was repatriated because he violated the residence permit in Indonesia by using a visa of visit.

“On April 10, 2022, the person concerned (HMNS) entered Indonesia through Soekarno Hatta International Airport in Tangerang using a visa on arrival (visit visa), which is for tourism with the number VSB4410495”, said Wawan, Friday (3/6/2022).

Wawan explained that the HMNS visa is valid until May 9, 2022 and has been extended until June 8, 2022. While in Indonesia, HMNS lived in the Puncak Permai apartment in Surabaya.

However, on May 18, 2022, immigration officers conducted on-the-ground surveillance at Gresik Regency. There, officers found HMNS working in a company.

“HMNS is studying wood which will then be offered to customers in India or Dubai. The person concerned has come to the company 4 to 6 times since his arrival in Indonesia,” he said.

The man who works as a broker told the officer that he was going to Indonesia for a trip. However, the evidence and information obtained by the agents is different from his residence permit.

“According to the person concerned, during the inspection, it turned out that the purpose of coming to Indonesia was to see business opportunities for wood, charcoal and snacks in Indonesia,” he said.

Additionally, officers immediately secured HMNS. Now, he will undergo the deportation process and be placed in the detention room of the TPI Tanjung Perak Class I Immigration Office.

“The person concerned is placed in the detention room of the TPI Tanjung Perak Class I Immigration Office and will be deported via Juanda airport using AirAsia airline with flight number QZ324 for the purpose of transiting to the Malaysia and then continue with flight number AK39 to India,” Wawan said.

Even so, Wawan continued, HMNS is free of criminal elements and other crimes. Because he only violated the visa or the residence permit according to article 75 of the law number 6 of 2011 on immigration.