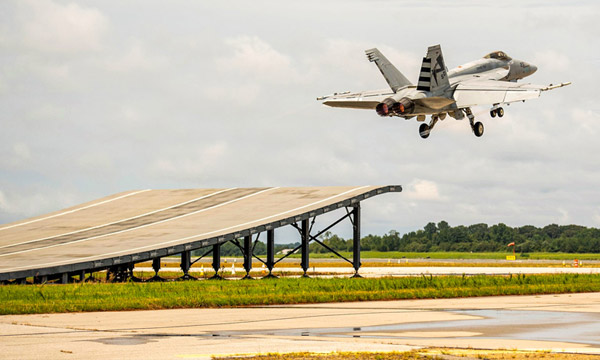 After a successful demonstration campaign by Rafale Marine in January, it was the turn of the Boeing F/A-18E Super Hornet to join Hansa Naval Air Base (INS Hansa) for rigorous testing by the Indian Navy.

The Super Hornet does have to demonstrate its ability to take off from an incline, in different configurations. The Hansa naval base, located in the vicinity of Goa’s international airport, has a special test facility (SBTF) with a 283-meter runway section ending at an incline and thereby reproducing the new ship’s deck dimensions. Indian aircraft carrier INS Vikrant. The STOBAR (Short Take-Off But Arrested Recovery) aircraft carrier will start operating next summer, on August 15, the 75th anniversary of India’s independence and secession from Pakistan. A decision by the Indian government could come quickly.

Testing of the F/A-18E in India will begin in a few days and will last until early June.

As a reminder, the Indian Navy will have to replace 45 MiG-29Ks with 57 new Western-made aircraft (in several installments). Only the Rafale M of Dassault Aviation and the Boeing F/A-18E/F Super Hornet entered the tender announced in 2017. The Super Hornet carried out a test takeoff at the naval air base on the Patuxent River (Maryland) in December 2020 (pictured) .

A less-than-biased study published last February by GlobalData, a British consulting firm, gave the Super Hornet the favourite against the Rafale M, thanks in particular to its folding wings and F414 (GE) engine, which had already been selected for HAL’s Tejas Mark 2. In contrast, an article published by La Tribune in April citing the advantages of Dassault Aviation’s multi-role aircraft in terms of size, the Boeing F-18 should enter the “shoe in the lift of Indian carriers” according to sources from the French economic and financial newspaper.

Whatever the case, the Indian government’s decision will obviously remain highly political, especially in the new geopolitical context associated with Russia’s invasion of Ukraine. Indian Prime Minister Narendra Modi also seems to want to maintain his neutrality in this conflict.