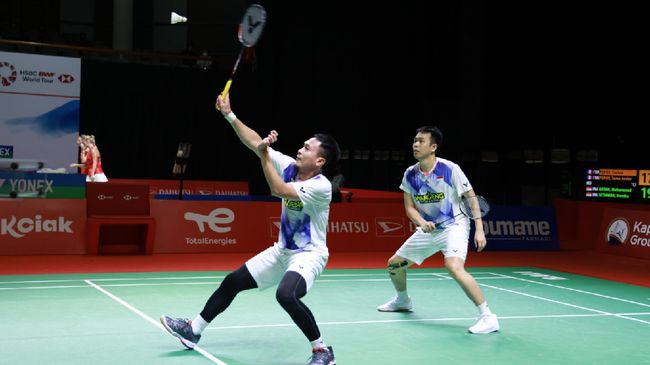 Rankireddy/Shetty led from the start of the match with a score of 2-0, then 4-2. Ahsan / Hendra, who tried to catch up, were able to equalize the score at 4-4.

However, the host pair were again leading 5-4. The Daddies can excel at 6-5 and 7-6. It’s just that Rankireddy/Shetty and still play solid and win again 8-7.

After that advantage, Rankireddy/Shetty hadn’t been joined by Ahsan/Hendra until the Indian pair took an 11-9 lead in the first interval of play.

Ahsan/Hendra fought back after the break to make it 13-13. However, Rankireddy/Shetty’s five straight points allowed them to run with an 18-13 advantage.

The number one seed from Indonesia won three straight points which closed the gap. However, Rankireddy/Shetty’s efforts were immediately rewarded by Ahsan/Hendra with three more points to win the opener 21-16.

In the second game, the competition between the two pairs was tighter, with Ahsan Hendra and Rankireddy/Shetty winning each other the points.

After a 6-6 draw, Ahsan/Hendra could lead 9-6 over Rankireddy/Shetty after winning three straight points.

Towards the end of the second game, the game was exciting again. The points for both partners were close. When Ahsan/Hendra lead by one point, Rankireddy/Shetty can equalize.

The points rally happened as Ahsan/Hendra led 20-19 to 24-23. After that, Rankireddy / Shetty picked up three straight points and closed the match with a 26-24 win as well as the 2022 Indian Open champions.